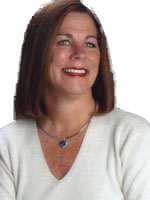 If more sports had been available during Rita’s high school career for the Incarnate Word Academy Red Knights, chances are good she would have played them all. At the time, only volleyball and basketball were offered at the private school and Rita excelled in both. An exceptional athlete, she played volleyball for three years and basketball for four years. After graduating from Incarnate Word, Rita attended the University of Missouri-St. Louis (UMSL) where her passion for athletics continued. There, Rita played nearly every sport offered at UMSL, including basketball, volleyball, soccer, field hockey and tennis. Her amazing athletic abilities contributed significantly to many winning seasons for UMSL.

In tennis, she was a top 16-ranked performer in the Missouri Valley Conference. Rita was a three-year starter in both field hockey and volleyball. In basketball, she starred as a starting point guard and averaged 18 points a game in her freshman season. In her last two seasons, Rita led the team to two conference titles and averaged 25 points per game.

But Rita had another passion – racquetball – which she began playing at age 20. She quickly asserted herself as a quality racquetball player and eventually went on to earn several honors in the sport.

After graduating from UMSL, Rita went to work for Anheuser-Busch as the director of Racquetball Promotions in 1978. She put on charitable exhibitions against NFL players in each tournament city, teaching clinics for adults and children, while making public appearances for the brewery. She was one of the founders of the Women’s Professional Racquetball Association (WPRA), serving on its board of directors. While competing on the WPRA Tour until 1986, she consistently ranked among the top 10 players. At one time she was ranked as high as third in the nation. During her pro career, Rita won seven racquwtball tournaments and earned 22 top three finishes.

In addition, after graduating from UMSL with a Masters degree, Scott coached the first varsity women’s basketball team at the school in 1974-75, guiding the team to a 15-1 record (a .928 winning percentage), the highest winning percentage ever recorded by any athletic team at UMSL.