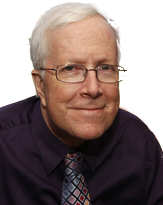 A sportswriter for the St. Louis Post-Dispatch since 1971, Rick Hummel won the 2006 J.G. Taylor Spink Award, presented annually by the Baseball Writers Association of America for excellence in baseball writing. The award was presented to him at the Hall of Fame induction ceremonies in 2007 in Cooperstown, N.Y.

Known throughout baseball by his nickname “The Commish,” Hummel is a former President of the Baseball Writers’ Association of America. Hummel was nominated for a Pulitzer Prize in 1980 after writing several articles about former shortstop Garry Templeton. Templeton was later traded to San Diego for Ozzie Smith. 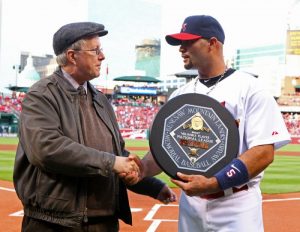 A native of Quincy, Illinois, Hummel has covered baseball for the St. Louis Post-Dispatch for four decades. He has received numerous awards for his writing and has been honored by the National Baseball Hall of Fame and the Missouri Sports Hall of Fame.

Hummel expressed an interest in sports journalism and broadcasting early on, auditioning for a job at a Quincy station when he was 12 years old. Hummel did not get the job, but later in high school he worked as a spotter for former MLB player and coach Elvin Tappe and his twin brother Melvin as they broadcast Quincy High School games. It was Melvin Tappe who also encouraged Hummel to pursue a career as a sports writer.

Following graduation from the University of Missouri in 1968 Rick Hummel served three years in the U.S. Army. While stationed in Colorado he also worked as a part-time employee for two years on the Colorado Springs Free Press-Sun. After his discharge from the Army in 1971, Hummel was hired by fellow Mizzou alum Bob Broeg to work for the Post-Dispatch. Broeg also earned the Sprink award and was inducted into Cooperstown in 1979.

Hummel has covered 35 World Series and 34 All-Star games and close to 4,000 games overall. But, he says: “One of the best parts is that for most of that time I’ve covered just four managers – Red Schoendienst, Whitey Herzog, Joe Torre, and Tony LaRussa – all of whom are either in the Hall of Fame or probably will be next year.”

Outside of baseball, Hummel has covered Marvin Barnes and Moses Malone who were with the Spirits of St. Louis of the defunct American Basketball Association. He also has reported on a couple of NCAA Final Fours and the Leon Spinks victory over Muhammed Ali for the heavyweight championship in 1978.