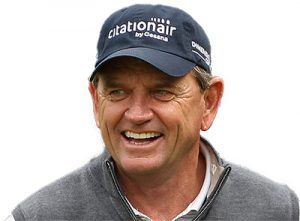 To call Nick Price one of the top contenders for a Professional Golf Association major championship in the 1980s and 1990s would be an understatement. After all, he had come within three strokes of winning two major championships (British Open, 1982, 1988) in his then 15-year career.

In fact, Price posted eight Top 1Os and besides finishing second in those British Opens – had not won one of the Majors (the Masters, U.S. Open, British Open and PGA Championship) – that is, until he finally put all the pieces together in a memorable finale to the 1992 PGA Championship at Bellerive Country Club.

The then 35-year-old native of Durban, South Africa, made nine straight pars on the front nine final round. He seized the title by sinking birdie putts of 25 feet on the par-3, 222-yard 16th and 12 feet on the par-5, 536-yard 17th. Price held off by three strokes the challenges of John Cook, Nick Faldo, Jim Gallagher Jr., and Gene Sauers, who had led the Championship for 59 holes.

Price was introduced to golf by his older brother, Tim, when Nick was 8-years-old. On his first trip to the United States as a 17-year-old, Price won the Junior World Championship in San Diego. He turned pro in 1977 and established him­self as a promising newcomer. Price graduated to the PGA Tour in 1983 when he went wire-to-wire to defeat Jack Nicklaus by two strokes at the World Series of Golf for his first tour victory. In the years that followed, Price was hailed by his peers as one of the best, and most likable, golfers on the tour. After winning the World Series, however, he did not capture another PGA To

ur event for eight years.

In 1982 Price narrowly missed winning the British Open Championship. He held a three ­stroke lead with six holes left to play, but he fal­tered and Tom Watson beat him by one stroke. Finally, in 1991, Price won two PGA events, the Byron Nelson Classic and the Canadian Open. The following year he came to St. Louis’ Bellerive Country Club where he captured the PGA Championship, beginning an incredible 24-month run in which he won 16 times and finished in the top 10 in 37 of 59 tournaments.

The 15th win came in July 1994 at the Open Championship, where Price avenged his 1982 heartbreak by sinking a spectacular 60-foot putt for an eagle on the second-to-last hole, a shot that clinched his victory. Then, in August at the PGA Championship, he shot an 11-under-par 269 to win and become the seventh golfer to capture back-to-back majors. Less than a month later he won the Bell Canadian Open.

Price won only three PGA events between 1995 and 2006. However, in 2007 he joined the Champions Tour, for golfers aged 50 or older. Two years later he won his first tournament on that tour. Price also designed golf courses and golfing apparel. In all, Price has tallied 18 PGA Tour victories and 24 International wins. He finished in the top 50 on the money list for 1 7 straight seasons and was ranked in the Top 50 in the world for 17 1/2 years.

In 2002, Price was the first recipient of the ASAP Sports/Jim Murray Award, given to a professional player for his cooperation, quota­bility and accommodation to the media, and for reflecting the most positive aspects of the work­ing relationship between athlete and journalist. He was also presented with the Payne Stewart Award, given annually to a player shar­ing Stewart’s respect for the traditions of the game, his commitment to uphold the game’s her­itage of charitable support and his professional and meticulous presentation of himself and the sport through his dress and conduct.

On October 20, 2003, Price was inducted into the World Golf Hall Of Fame at a ceremony in St. Augustine. He became its 99th member.