What are the odds that a set of brothers could win not only Olymplic gold medals, but would both go on to claim the World Heavyweight championship as well? If you surmised the odds would be staggering, you’d be right on.

But that’s what happened to the Spinks brothers – Leon and Michael – who battled their way off the streets of the Pruitt-Igo housing projects into becoming legends of the boxing world. The Spinks brothers each captured gold during the 1976 Olympics in Montreal – Leon at light heavyweight and Michael at middleweight. And before he moved up to heavyweight, Michael also was the undisputed light heavyweight champion as a pro. 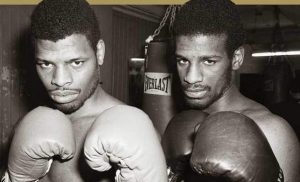 But that’s where the comparison of the brothers ends. Leon, who some say was the more naturally gifted of the two, has been described as a free spirit in and outside of the ring. His shocking victory over Muhammad Ali for the WBC and WBA heavyweight championship in 1978 in only his eighth pro fight, gave Leon sudden fame.

Michael, the younger brother, made history in 1985 with his split decision victory over heavily favored Larry Homes. Holmes was making his 20th world title defense and trying to extend his 49-0 record. Michael’s victory, however, made him the first light heavyweight champion to win the heavyweight title in 77 years. For his boxing endeavors, Michael was inducted into the International Boxing Hall of Fame in 1994.

For all their differences, however, the brothers had one constant – their backing of each other through the years. Whether it was back in their old Pruitt-Igo neighborhood in St. Louis, where gangs and drugs roamed freely, Leon and Michael found their way out at a nearby gymnasium and learned to box – many times against each other with each giving as much as he got.

Leon, whose career highlight was his victory over Ali, finished with an overall record of 26-17-3 with 14 knockouts. Michael finished 31-1 with 21 knockouts.