Lea Plarski of Godfrey is a true pioneer in women’s sports. She has experienced it all during a lengthy, legendary and remarkable career. It includes the Olympic Games, the Women’s Basketball Hall of Fame and a lifetime achievement award from the St. Louis Sports Commission.

“I’ve had a very fulfilling life and very rewarding,” Plarski said. “It has been an honor to participate in a lot of national and international activities. I’ve made friendships from people from all over the world.” Part of that international scene included the Olympics, which Plarski holds close to her heart. She was involved in decision-making with the U.S. Olympic Committee for more than 25 years, including a prestigious seat on the Board of Directors and House of Delegates.

And with the 2020 Olympics starting set this summer in Tokyo, it’s easy to see why those Games – held once every four years — are so special. “I think the Olympic Games are the best (sporting) event,” Plarski said. “There’s nothing more gratifying than representing your country.” Those Olympic quests have carried Plarski across the globe. She’s a verified world traveler.

“I’d say I’ve been involved in some kind of activity or event in more than 40 countries,” she said. You can count China, the Soviet Union, South America, Mexico and Canada, among others, in that group.

What caught her attention the most? “The FIBA World Championships in Seoul, South Korea, was one of the most exciting and rewarding competition that I’ve ever seen,” Plarski said of the 1979 women’s basketball finals. She added, “The final results were not only based upon wins and losses, but the point spreads. In the final game against Canada, the U.S. team had to win by more than 12 points to win the gold medal and we did that.” She later became friends with East St. Louis’ Jackie Joyner-Kersee, who excelled in four Olympics and was regarded as the Greatest Female Athlete of the 20th century.

However, the Olympics are just part of Plarski’s portfolio. She was involved in the advent of Title IX that gave females more opportunities, and a key player in growth of women’s basketball. Plarski was a founding member of the Women’s Basketball Hall of Fame at Knoxville, Tenn., in 1998. She nurtured it along and became fast friends with Pat Summit, the legendary University of Tennessee women’s basketball coach. Summit died in 2016. “Getting the Hall of Fame going was very pleasurable because it was a mission of mine,” Plarski said. “It’s a place where we can honor and recognize those who have contributed to women’s basketball since its inception.” 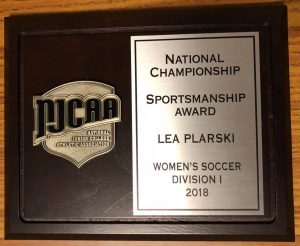 Her honors are endless. Athletics Administration, a national publication, called Plarski one of the top 25 individuals for women and events since 1972.

The National Junior College Athletic Association created the Lea Plarski Award in 1995 for a student that best exemplifies athletic ability and academic excellence.  She was selected as the NJCAA’s first woman president in 1990, or 15 years after establishing the women’s division of the organization.

Plarski worked at Florissant Valley Community College for 37 years, serving as a teacher, coaches, director of athletics and administrator. The St. Louis Sports Commission awarded her the Citizenship Through Sports Alliance Lifetime Achievement Award in 2006. Four years earlier, she was inducted into the Women’s Basketball Hall of Fame.

You can find her fingerprints on the 1994 Olympic Festival that played out in St. Louis and Southwestern Illinois. Plarski also was involved with the Women’s Sports Foundation, the Amateur Softball Association and the American Bowling Congress. For years, she played second base for the Alton Lakers of the Southwestern Illinois Twilight Softball League.

Been there, done that might be Plarski’s motto. She followed that trail after growing up in Augusta Kan., near Wichita, and graduating from Emporia State, Kan. “I didn’t get the opportunity to participate in organized sports, so there was incentive for me to get women’s sports off the ground and get involved in them,” Plarski said.