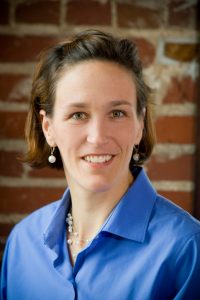 It is hard to imagine anyone owning a more impressive high school athletic resume than Kristin Folkl. At St. Joseph’s Academy in St. Louis from 1990-1994, as a varsity starter in both basketball and volleyball each of her four years, she helped her school to eight state championships. In her senior year she received the Dial Award, which honors the best high school female and male athletes in the country (the male recipient that year was Tiger Woods).

Not surprisingly, she was an eight-time first team all-state selection in both volleyball and basketball and was named to All-American teams in each sport, all four years of high school. She was named a first-team All-American her senior year in volleyball by three separate entities and was named the Player of the Year by two. In basketball, Folkl was a three time Gatorade Circle of Champions Missouri Player of the Year, and was selected first team All-American by Parade Magazine, Kodak and Naismith.

In the classroom, her high school accomplishments were equally impressive. She graduated third in her class at St. Joe’s with a 4.2 GPA (out of 4.0) and was a member of the National Honor Society and the American Academy of Ac 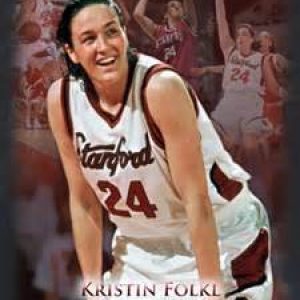 Kristin continued her two-sport dominance at Stanford University, where she was part of three NCAA national championships teams in volleyball. As a four-year starter, she helped her team to four Final Four appearances, four Pacific-10 Conference titles and an overall record of 125-8. She was a four-time All- American and she earned five player of the year awards, including the GTE Academic Player of the Year, her senior year. In addition, she was voted one of the top 25 NCAA Division I volleyball players during the 1980-2005 period as well as Player of the Decade by Volleyball Magazine.In basketball, Folkl helped Stanford to two Final Four appearances, three Pacific-10 Conference titles and an overall record of 85-11. As a senior, Folkl was named a first team All-American by four separate publications.

After completing her economics degree with a 3.65 GPA in three and a half years at Stanford – stepping out of school her sophomore year to serve as the youngest member of the 1996 U.S. Olympic volleyball team. Upon graduating in 1998, she received the Al Master Award, the highest award given by the Stanford Athletic Board.  Folkl’s combined high school and college record for both sports was an amazing 464-31.

Folkl was part of the WNBA for five seasons splitting her time between Minnesota and Portland. In her professional “off” seasons from the WNBA, she played in professional basketball leagues in Greece, Switzerland and Australia. She earned most valuable player honors in Greece, and was an All-Star 5 selection in both the Swiss and Australian leagues.

Among her other honors, Folkl has been inducted into the Missouri Sports Hall of Fame, the Stanford Hall of Fame and most recently the National High School Hall of Fame. She was also part of the U.S. National volleyball teams that won gold at the Grand Prix in Shanghai, China, and that won silver at the Goodwill games in St. Petersburg, Russia.

When asked if she has ever dunked a ball, she is happy to reply “yes, but never in a game…so does that count?” Folkl currently resides in St. Louis, MO with her husband and two young children.