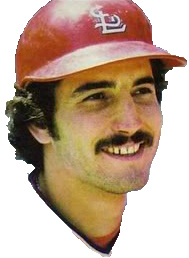 Keith Hernandez was drafted by the Cardinals in the 42nd round of the 1971 draft, as the 776th overall player and quickly evolved into one of the team’s stars. In 1979, he led the league with a .344 batting average, 48 doubles, and 116 runs scored, and went on to share the National League’s Most Valuable Player Award with Pittsburgh’s Willie Stargell.

The first basemen also was a standout in 1982 World Series, when the Cardinals defeated the Milwaukee Brewers in seven games. In Game 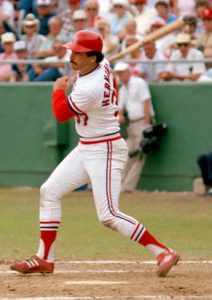 6, Hernandez and Cardinal catcher Darrell Porter hit home runs in a 13-1 thrashing of the Brew Crew. Hernandez was traded to the New York Mets on June 15, 1983 for pitchers Neil Allen and Rick Ownbey.

As a fielder, Hernandez won 11 consecutive Gold Glove Awards (1978-1988) at first base. A clutch performer, he ripped a career-record 129 game-winning RBIs, including 24 in 1985 when he helped the Cardinals reach the World Series. He batted .300 seven times and still owns the record for most assists by a first baseman.

Hernandez was named to the All-Star Game five times between 1979 and 1987.

In the first two years of his career, Hernandez wore uniform No. 18. In 1976, he switched to No. 37, insisting that his uniform number end with a “7” in honor of his hero Mickey Mantle. The Mets had retired number 37 for former manager Casey Stengel, so Hernandez switched to number 17, which he wore for the remainder of his career in New York.

His veteran leadership seemed to give the Mets confidence and credibility. In his first full season with the Mets in 1984, the team improved from a record of 68-94 to 90-72. The Mets finished second behind the Chicago Cubs in 1984 and the Cardinals in 1985, but won the World Series in 1986. The following season, Hernandez was named the team’s first team captain.

Keith has been an active and faithful crusader in the battle against Alzheimer’s disease. He lost his mother to Alzheimer’s in 1989, and has since worked tirelessly on behalf of people afflicted with the disease and their families.