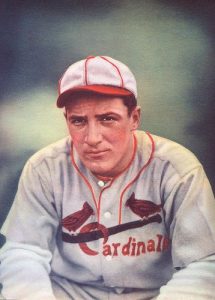 Joe “Ducky” Medwick, a star left fielder for the Cardinals from 1932-40 and ’47-’48, won both the Most Valuable Player award and the Triple Crown in 1937 by leading the National League in batting average, home runs, and runs batted in. Known for his ability to hit difficult pitches, Medwick batted .300 or higher in 14 out of 17 seasons in the Major Leagues. He set an NL record with 64 doubles in 1936.

Medwick was born in Carteret, N.J. Medwick dreamed of playing football for Notre Dame, but after hitting .419 in the minor leagues, he decided baseball was his calling. He joined the Cardinals in 1932 and logged a batting average of .349 in 26 games his first year. In 1934 he led the league in triples with 18, hit .319, scored 110 runs, and had 106 RBIs helping lead St. Louis to the pennant.

A 10-time All-Star, he won his only batting title in 1937 by leading the majors with a .374 average. He also led the NL with 154 RBIs and tied for a league-high 31 home runs to become the 10th man in history to win the Triple Crown. No National League player has done it since. He also led the league that season with 111 runs, 237 hits, and 56 doubles. In fact, Medwick continues to hold the Major League record with seven consecutive seasons with 40 or more doubles, a 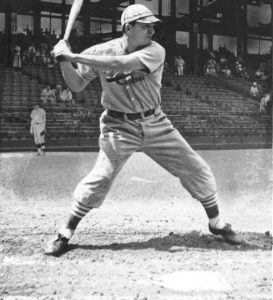 During the 1941 season, Medwick was traded to the Brooklyn Dodgers. He hit .318 and helped the team win the pennant, However, he  batted just .235 in a five-game loss to the New York Yankees in the World Series. He joined the New York Giants in 1943 and was traded to the Boston Braves in 1945. He returned to play for the Dodgers and then the Cardinals before retiring in 1948.

Medick was known as a highly competitive player, which fit into the Cardinals’ aura of  the “Gashouse Gang” of the 1930s. Born to Hungarian immigrants, he was nicknamed “Ducky” and “Ducky Wucky” by the fans because of his waddle, but his build led to the nickname of “Muscles,” which meant that none of his teammates dared to use the name “Ducky” to his face. His hard-charging style of play got him pulled out of the seventh game of the 1934 World Series by Commissioner Kenesaw Mountain Landis. In that game, Detroit Tigers fans pelted him with garbage after he slid hard into third on a triple. Landis also ordered Tigers third baseman Marv Owen, Medwick’s slide victim, benched.

Medwick helped lead the Dodgers to a pennant in 1941, but had lost much of his dominance after being nearly killed by a beanball thrown by a former Cardinal teammate six days after his 1940 trade. He eventually returned to finish his career with the Cardinals in 1947 and 1948.

During a USO tour by a number of players in 1944, Medwick was among several individuals given an audience by Pope Pius XII. When asked by the Pope what his vocation was, Medwick replied, “Your Holiness, I’m Joe Medwick. I, too, used to be a Cardinal.”

Medwick was ranked No. 79 in The Sporting News list of Baseball’s 100 Greatest Players. That same year, he was nominated as a finalist for the MLB All-Century Team. He was elected to the National Baseball Hall of Fame by the Baseball Writers Association of Amercia in 1968 by receiving nearly 85 percent of the votes.