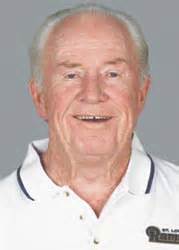 If the Pro Football Hall of Fame opened a wing for assistant coaches, Jim Hanifan would be an inaugural inductee.

Although he was head coach of the St. Louis Cardinals for six years (1980-85) and interim head coach of the Atlanta Falcons for the final four games in 1989, Hanifan spent the bulk of his 30 NFL seasons as an offensive line coach extraordinaire. Beginning in 1974 in St. Louis, his lines allowed the fewest sacks of any team in five consecutive seasons. His 1975 Cardinals line gave up eight sacks, tying what then was the NFL record for fewest sacks in a 14-game season, and his 1991 Redskins unit yielded only nine sacks in 16 games. Over the years, he coached dozens of players, including Hall of Famers Dan Dierdorf (Cardinals) and Russ Grimm (Redskins).

“Would I have been a Hall of Famer without him as my coach? Probably not,” Dierdorf wrote in the introduction to Hanifan’s biography, Beyond Xs and Os, My Thirty Years in the NFL. “When I thought who was the person who was the biggest influence on my professional career, it wasn’t even close. There was no one who could rival what Jim Hanifan did for me.”

A native Californian, James Martin Michael Hanifan was born on Sept. 21, 1933, the son of Irish immigrants. He grew up in Covina; went to the University of California, where he was an All-American tight end in 1954; and received his coaching indoctrination at Yuma City Junior College, working under Frank “Bud” Van Beren, the man Hanifan credits for molding “me into what I became as a coach.”

After the 1973 season, Hanifan was driving from his home to Busch Stadium when he started thinking about what made St. Louis special. He knew it didn’t have the ocean or the mountains like California. Finally, it struck him. “I know why I like it so much here,” Hanifan said. “It’s the people. There are a lot of nice people here—neighbors, friendly people, people trying to help you out. So I’ve always had a fondness for St. Louis. It never made me think that it was a huge, major, big-time metropolis. I felt like it was a big community where you knew  everyone in town.”

And it seems like everyone in town knows Hanifan. He’s everyman’s coach. He’s as comfortable sitting across the dinner table telling stories to a group of businessmen as he was in a football meeting room. His players had an unbridled affection for Hanifan. In 1987, two years after he was fired as head coach of the Cardinals and was then coaching in Atlanta, the Cardinals played the Falcons. After the game, all of the Cardinals players came across the field and stood in a line parallel to the Atlanta bench. One by one, they shook the hand of their former coach. “That was one of the coolest things I’ve ever had happen to me,” Hanifan said.

Three years later, during Hanifan’s first season as line coach of the Redskins, he was standing on the field before a game against the Cardinals, talking to Redskins radio announcers Sonny Jurgensen and Sam Huff. Suddenly, Cardinals owner Bill Bidwill walked up. He asked Hanifan to introduce him to Jurgensen and Huff, two Hall of Famers. Afterwards, Jurgensen and Huff were miffed. They asked Hanifan why he would bother to introduce them to Bidwill, the man who had fired him in St. Louis. “I said, ‘Hold it, hold it, hold it, guys,’” Hanifan recalled. “‘He’s also the same guy who hired me.’”

Since retiring from coaching, Hanifan has been a radio analyst before, during and after Rams games. He’s also working on a second book, this one on offensive line techniques that is targeted toward high school coaches.

Hanifan is one of the few NFL coaches to have won Super Bowl rings with two different teams (the Redskins in 1991 and the Rams in 1999). “This was the first one,” he said, indicating the Redskins ring on his left hand. “They’re kind of hard to get. It took me 10 years to get that one. And then coming back here and feeling like this is my hometown, this one (the Rams ring on his right hand) is special.”

That’s the word that best describes Jim Hanifan. As a coach and as a man – he’s special.