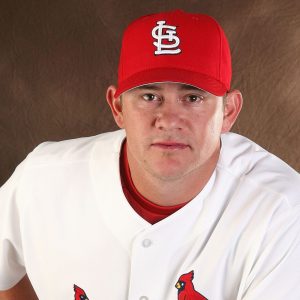 For a 44th-round draft selection out of Lewis & Clark Community College in Godfrey, Illinois, the 1157th player taken, Jason Isringhausen had a pretty good Major League baseball career. When the New York Mets took a flyer on him in the 1991 draft, they had no idea what the future held. It didn’t take long, however, for them to discover his value. All the big right-handed pitcher did was play 16 seasons in the Major Leagues, becoming a two-time All-Star, and was regarded as one of the game’s all-time great closers.

Born in Brighton, Illinois, some 40 miles northeast of St. Louis and where he went to Southwestern High School, Isringhausen made it to the Mets’ big league team in 1995, going 9-2 with a 2.81 earned-run average as a starter. That effort placed him fourth in the Rookie of the Year balloting (the Cardinals John Mabry placed fifth). But several serious injuries, including tuberculosis, a broken wrist and three operations on his pitching arm, slowed his progress. They forced him to miss most of the 1997 season, as well as the entire 1998 season. When he was finally healthy in 1999, he was moved to the bullpen, then was traded to Oakland. 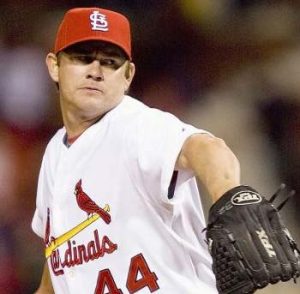 zy” found his niche as a reliever and closer. He soon was regarded as one of the American League’s top closers and was named to the All-Star team in 2000. Two years later, Izzy signed a free agent contract with the Cardinals and for the next seven years his fame continued to grow with the Redbirds.

During Isringhausen’s time with the team, the Cardinals won the Central Division in 2002, 2004, 2005, and 2006 with World Series appearances in 2004 and 2006, winning the World Series in 2006. He registered a league-leading 47 saves in 2004, tying the franchise record that Lee Smith set, until Trevor Rosenthal broke the record in 2015. He was an All-Star and posted a 2.14 earned run average with 39 saves in 2005 as the Cardinals won 100 games. During the 2006 season, however, Izzy developed hip problems, forcing him to miss the playoffs and allowing Adam Wainwright to take over as the closer.

During the off-season, Isringhausen underwent his second hip surgery, but when Wainwright went into the rotation, Isringhausen returned as the closer to begin 2007. Isringhausen again was impressive, posting a 4–0 record, 2.48 ERA, and 32 saves that year. But in 2008, Izzy developed tendinitis and a torn tendon in his pitching arm and was shut down.

He signed with the Los Angeles Angels in 2012, appearing in more than 50 games, before retiring.