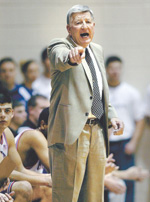 McKendree College recently installed a 2,500-pound bronze Bearcat, representing the school’s mascot, on its Lebanon, Ill., campus. Now it needs to erect a statue of the man.

Harry Statham, who came to McKendree to coach men’s basketball in 1966 and never left, has compiled a 1,077-451 record in 48 seasons. That’s more victories than such coaching icons as Dean Smith, John Wooden, Bobby Knight and Mike Krzyzewski. In fact, former Tennessee women’s coach Pat Summitt (1,098) and Oregon Institute of Technology men’s coach Danny Miles (1,004) are the only two other coaches to amass 1,000 wins at four-year schools.

But Statham, 77, who is so set in his ways that his teams always take the court to the sound of the “William Tell Overture” three minutes before tip-off, trumpets the triumphs of the whole instead of the individual. “We’re very team-oriented, and we’ve tried to sell that from the very beginning,” said Statham. “When you play hard and play together and do things fundamentally sound, you’re going to be competitive.”

The Bearcats have been nothing if not competitive under Statham, who put McKendree basketball on the national map. They won 12 American Midwest Conference championships and made 15 appearances in the NAIA Division I national tournament before making the transition to NCAA Division II. McKendree has advanced to the postseason in 40 of Statham’s 48 seasons, and has won 20 or more games 35 times.

Statham’s best team was his 2002-03 squad. It went 34-4 overall (10-0 in the AMC) and was ranked No. 1 in the NAIA during the regular season. The Bearcats reached the NAIA Final Four before losing to eventual champion Concordia (Calif.) in the semifinals.

Statham has coached 71 players who received postseason honors, including 10 who were selected as NAIA All-Americans. Three of his players advanced to the professional ranks: Paul Funkhouser, a supplemental draft pick of the NBA’s Chicago Bulls and ABA’s Carolina Cougars; Dale Haverman, a fifth-round pick of the Seattle Sonics in 1977; and Matt Laur, a fourth-round selection by the Columbus (Ga.) Riverdragons of the NBA’s Developmental League in 2003.

An Illinoisan all his life, Statham was born in Brookport, Ill., on May 29, 1937, the same day his father was buried after dying of pneumonia. He began his coaching career while he was an undergraduate at McKendree, coaching the boys’ basketball team at O’Fallon Junior High. After graduating from McKendree in 1960, he moved on to the University of Illinois, where he was a grad assistant for the men’s basketball and track teams while he completed his master’s degree in physical education.

Statham then coached high school basketball—at Forman (Manito, Ill.) for two seasons and at Dwight Township for three—before returning to his alma mater as head basketball coach. He doubled as McKendree’s athletics director until 2010 and helped the school grow from a handful of sports to 24. He still is an assistant professor of physical education.

A 1987 inductee into the IBCA-NAIA Hall of Fame and a 1998 enshrinee in the NAIA Hall, Statham has received numerous individual honors:

One of the many milestone moments for Statham came on Dec. 1, 2004, in a home game before a sellout crowd. The Bearcats beat Maryville University, 83-72 for Statham’s 880th career victory, lifting him past the legendary Smith for all-time wins among college basketball coaches.

Other than a ton-plus of pounds, that new Bearcat statue on McKendree’s campus has nothing on Statham. Next season will be the 50th as basketball coach for Statham, who has a gym and a street named after him. Seems like a statue would be an appropriate golden anniversary commemoration.