A legend as a college soccer coach and player, Keough was part of multiple winning St. Louis clubs. He played in the World Cup and two Olympics before becoming a five-time NCAA champion as coach of St. Louis University.

A defender, Keough played on the legendary 1950 U.S. World Cup squad that stunned England, 1-0, one of the biggest upsets in U.S. sports’ history. Before the game, most thought the Americans shouldn’t even be on the same field with the mighty Brits, who along with Brazil were the favorites to win the World Cup. The odds makers listed the U.S. at 500-1. “England, in my own thoughts, was way up high and we were down a little lower,” he said. “If they were going to beat us, they had to really work hard to beat us. But I didn’t entertain any thoughts that we were going to beat them.”

The game was played in Belo Horizonte, a mining town about 350 miles north of Rio de Janeiro and the English played with the trademark cool and intensity that had made them one of the world’s best soccer teams. They didn’t flinch when the upstart Americans took the lead. It wasn’t until the closing minutes of that 1950 World Cup g 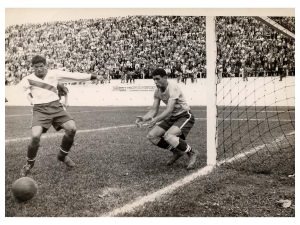 ame that panic set in! What was supposed to be an easy victory over the Americans was about to become an unthinkable catastrophe. “They could see it slipping from them,” Keough recalled. “They didn’t ever dream we could beat them. Neither did we, for that matter.” The victory is the subject of the book and movie “The Game of Their Lives.” To this day, the English won’t wear dark blue shirts like the ones they wore in Brazil and a generation cringes at the mere mention of 1950.

Keough, who was a postal worker at the time, appeared in all three World Cup games that year. He also played for the 1952 U.S. Olympic team and received 17 caps in his national team career. He appeared in the Olympic Games of 1952 in Finland and the 1956 game in Australia. He won U.S. Open Cup medals with St. Louis Kutis in 1954 and 1957 and U.S. Amateur Cup medals with the St. Louis Raiders in 1952, plus six more with Kutis between 1956 and 1961. His outstanding career really began in 1945 when he was a member of the St. Louis Schumachers, a team that won the U.S. Junior Cup.

Shortly after that, he found himself in the Navy playing for the San Francisco Barbarians and soon thereafter was a crewman on a destroyer operating out of San Diego Bay. Upon his retirement as a player, he became coach of Florissant Valley Community College. In 1967, St. Louis University hired him away from Florissant Valley and in his first year with the Billikens, Keough took his team an NCAA co-championship. He then led St. Louis U. to four more championships during his tenure (1969, 1970, 1972, and 1973). When he retired from coaching in 1982, he had compiled a 213-50-23 record with SLU.