George Sisler is considered the greatest St. Louis Brown of them all and one of the half-dozen finest first basemen in baseball history. He came to the majors as a left-handed pitcher, but his hitting was too phenomenal to be restricted to a pitcher’s schedule. He arrived in St. Louis in 1915, the same year as Rogers Hornsby, and for 11 seasons they were rivals in excellence.

Branch Rickey was his mentor, coaching Sisler at the University of Michigan, where he was an outstanding pitcher. Rickey also counseled Sisler, helping him eventually land a spot with the Browns, a team Rickey would manage after Sisler arrived.

Other major league clubs were interested in Sisler. Barney Dreyfuss thought the Pirates owned him and, under baseball law, perhaps he did. In 1911, underage and without parental consent, George signed a professional contract. He received no money and played no games, but while he pursued his education, the contract was sold to Pittsburgh. After four years of anguish, argument and indecision, the National Commission ruled the contract invalid and made Sisler a free agent. He considered an offer from Pittsburgh, but opted instead to play for the Browns.

Sisler had promise as a pitcher. Still, it was unthinkable not to have his bat in the lineup every day, and his glove at first base – a perennial -weak spot for the Browns. In the field, Sisler was fast, adroit and graceful, a combination tha 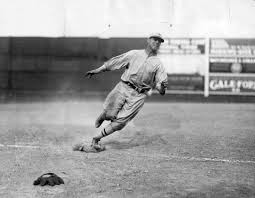 t gave elegance to his execution of plays. He led the American League  in assists seven times and his career total of 1,528 assists ranks No. 1 on  the all-time list. He led the league in double plays three times, including 13 in 1920. Once against Washington, with Joe Judge on third, Sisler anticipated a squeeze bunt by Roger Peckinpaugh. Darting in with the pitch, he fielded the ball before the right-handed Peckinpaugh started down the line. Sisler brush-tagged him and then flipped the ball to catcher Hank Severeid to nip Judge at the plate. The play resulted in two outs on a squeeze bunt.

For his career, Sisler hit .340, tying him for 15th place on the all-time list with Lou Gehrig.  At just under 5-foot-11 and a trim 170 pounds, Sisler swung a 42-ounce bat. He often choked up on the handle, but few could handle the lumber as well as Sisler. He recorded 200 hits in six seasons. In 1920, he established a major league record with 257 hits, which still stands.  Sisler was also an excellent run producer. He drove in 1,175 runs during his career.

His 1920 season was as mighty a performance as any player has ever produced. Playing every inning of every game, Sisler hit .407. Among his 399 total bases were 49 doubles, 18 triples and 19 home runs. He went hitless in only 23 games and climaxed the season with prodigious averages of .442 and .448 in August and September, respectively. He also drove in a career-high 122 runs and stole 42 bases. In 1922, when the Browns missed winning the American League pennant by one game, Sisler hit safely in 41 consecutive games en route to a  .420 average.

He missed the 1923 season with severe sinusitis that infected his optic nerves, which caused double vision.  Sisler returned in 1924, signing a $25,000 contract as player-manager. He hit .305 in 151 games. In 1925, he was back on track with 224 hits and a .345 average. In fact, he only had one sub-.300 season in seven after recovering from the illness. Although he managed to continue playing, his eyesight was never the same.

After 1930, Sisler drifted into the minors and eventually went into private business, operating printing and sporting goods companies. Rickey recalled him to baseball in the 1940s as a scout and special hitting instructor at Brooklyn and Pittsburgh.