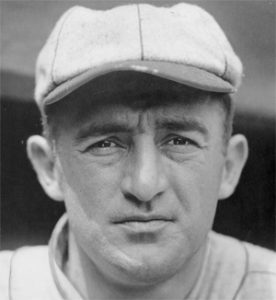 Frankie Frisch was an all-around athlete who jumped directly from college to the New York Giants and played on eight pennant-winners in 19 seasons. He played for the St. Louis Cardinals from 1927-37, managing the club from 1933-38. A fine switch-hitter, Frisch compiled a run of 11 straight .300 seasons and set single-season fielding records as a second baseman for chances and assists with the Cardinals in 1927. As player-manager with St. Louis, he instilled the rollicking all-out style of hard-nosed play that prompted sportswriters to tab the Cardinals “The Gashouse Gang.”

Frisch displayed his natural athleticism in Fordham Prep School and Fordham University, where he majored in chemistry. He was a track star (gaining the lifelong nickname “Fordham Flash”) and captained the football, basketball and baseball teams. In 1918 Frisch was named a halfback on an All-American team. The following year he was signed by the New York Giants and never played in the minor leagues.

Frisch’s breakthrough season came in 1921, when he had 211 hits, hit .341, and stole a league-leading 49 bases while splitting the year between second and third. He became a Giants stalwart as McGraw’s club won the first of fo

ur consecutive pennants. However, after an especially tough loss in St. Louis well into the season, and an especially cruel post-game diatribe from manager John McGraw, Frisch left the team and returned home to New York. He came back to finish the season, but his relations with McGraw were beyond healing. He was traded to the Cardinals in a blockbuster deal. The Giants gave up Frisch and pitcher Jimmy Ring for Cards’ second baseman Rogers Hornsby, considered by many as the greatest right-hand hitter ever. The Cards made the trade because of owner Sam Breadon’s irreconcilable differences with Hornsby.

Hornsby was a fan favorite, but it didn’t take Frisch very long to win over their fans with a brilliant season, hitting .337 with a league-leading 48 stolen bases, and setting a still-standing major league record for second basemen of 641 assists. Frisch was the indispensable spark as the Cards narrowly missed winning the pennant, and he was the field leader as the Cardinals won pennants in three of the next four seasons. Frisch was voted the National League’s Most Valuable Player in 1931 as the Cardinals won the pennant.

Frisch became the Cardinals player-manager midway through the 1933 season, his team finishing in fifth place. Shortly before taking over as manager, he played in the first All-Star game at Comiskey Park in Chicago. Batting right-handed in his first at-bat, Frisch singled. Later, hitting left-handed, he became the first National Leaguer to hit a home run in the mid-summer Classic.

Frisch’s colorful 1934 club came on strong in the last month to edge the Giants for the pennant and topped off the season with a tumultuous World Series win over the Detroit Tigers. Frisch’s club finished second again in 1936, losing to the Giants, and slipped to fourth place the following year. The colorful Gashouse Gang years were largely over and Frisch’s managerial years in St. Louis ended after the 1938 season.

Frisch left the playing field in 1939 for the radio booth, doing play-by-play broadcasts for the Boston Braves and was a hit on the radio despite his high-pitched voice and lack of training as a broadcaster. Frisch had a lifetime average of .316 in 2,311 games with 2,880 hits and 1,244 RBI’s. He led the National League in stolen bases in 1921, 1927, and 1931 for a career total of 419, an excellent number for the era in which he played.

Frisch set several fielding records for National League second basemen, and numerous batting and fielding marks in his 50 World Series games. He was elected to the National Baseball Hall of Fame in 1947.