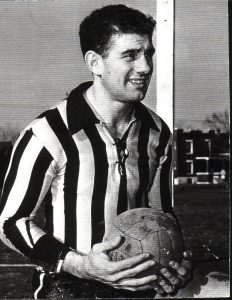 Some 61 years ago, a group of American soccer players — including five from St. Louis’s Italian neighborhood known as “The Hill,” and another from Carondelet — represented the United States in the 1950 World Cup in Brazil. At a time when there was no nationwide professional soccer, the six St. Louisans were part-time players who held regular jobs. Although, the five St. Louisans from the Hill had won the U.S. Open Cup — emblematic of the U.S. championship — in 1948 and 1950 as members of a team sponsored by Joe Simpkins Ford, the U.S. was given little chance at the World Cup. The odds makers listed the U.S. at 500-1.

The six St. Louisans included Frank Borghi, who originally played soccer in the winter only to keep physically fit for baseball – his true love. A farmhand in the Cardinals’ minor-league system, Borghi was a big man gifted with huge hands. He could catch and throw a ball — any ball — a long way. As a soccer player, though, Borghi’s foot skills weren’t the best, so he asked his coach, Joe Numi, if he could move to goalkeeper. Borghi found himself a natural fit in the nets, and it was there that he won the position as the USA’s goalkeeper for the World Cup. With that as the backdrop, the U.S. prepared to play Spain in the first match of the World Cup. The overlooked Americans were not easy pickings. St. Louisan Gino Pariani scored a goal to put the Americans ahead, 1-0, and the Spaniards had to come from behind with three goals in the last 12 minutes to win 3-1.

Next up … England, the birthplace of soccer and the heavy favorite to win the World Cup. The British, however, had to deal with an American lineup that started five St. Louisans: Harry Keough, and four Italian boys from Simpkins: Pariani, Frank “Pee Wee” Wallace, Charlie Colombo and Borghi. (The fifth Simpkins player, Bob Annis, was not a starter.)

While all 11 Americans would give the British fits, England’s biggest headache would come from Borghi. Just after kickoff, Borghi gave the Americans a big lift by barely pushing aside a crisp shot from England’s Roy Bentley. The first 12 minutes saw England taking six shots on goal, with one saved by Borghi and two more hitting the posts. Then, with about eight minutes to go in the first half, a diving Joe Gaetjens headed the ball into the opposite corner of the net, giving the upstart Americans a 1-0 lead. But Borghi worried over the Americans’ halftime lead. Knowing the riled English players would double their assault, Borghi thought, “Oh my God, the roof is going to cave in.”

However, Borghi and the Americans held strong and turned aside one attack after another. Perhaps the most dangerous moment came with eight minutes left. England’s Stanley Mortensen had a breakaway and was tackled from behind by Colombo just outside the penalty area. On the ensuing free kick, England’s Jimmy Mullen headed the ball on the bounce past Borghi. Somehow, Borghi reached behind him and knocked the ball away to preserve the shutout and what has been described as the biggest upset in World Cup history.

Borghi would continue as the National Team’s goalkeeper through the 1954 World Cup qualification rounds. He retains greater pride in his accomplishments with the Simpkins-Ford semi-pro team that won the U.S. Open Cup in 1948 and 1950, and his election into the National Soccer Hall of Fame in 1976. Many others disagree, however, and consider Frank’s greatest moment was his shutout against England in Belo Horizonte. It remains arguably the greatest highlight of American soccer to this day.