Charles Edward “Easy Ed” Macauley, was born March 22, 1928 in St. Louis. Macauley was a basketball star at St. Louis University High School. A loyal native of St. Louis, his mother allowed him to choose any college that was “Catholic and in St. Louis.” Thus “Easy Ed” made his decision to attend and play basketball for the St. Louis University Billikens where he helped the Billikens win the 1948 National Invitation Tournament title. At this time, the NIT was considered the national championship of college basketball. The next season he was named the AP Player of the Year.

Macauley first played in the NBA with the St. Louis Bombers as a territorial pick. When the Bombers disbanded, he was picked up by the Boston Celtics and then was traded to the St. Louis Hawks in what was said to be a trade the helped both clubs.

Later a high-scoring Boston Celtics star, Macauley made All-NBA three straight years and was MVP of the first All-Star game in 1951. He won an NBA title with the St. Louis Hawks in 1958 and then coached them to the finals in 1960. When Macauley was with Boston, he was named MVP of the first NBA All-Star Game. (He played in the first seven.) He was named to the NBA’s All-NBA First Team three straight seasons and was named to the All-NBA second team once, in 1953-54 — the same season he led the league in field goal percentage. 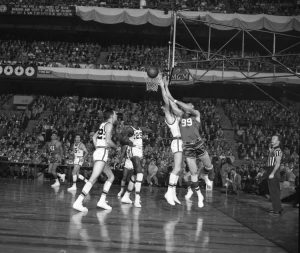 In 1956, Macauley was involved in one of the biggest trades ever made in the National Basketball Association. On April 29, 1956, Macauley was traded (with Cliff Hagan) to St. Louis, for the rights to Bill Russell. “I got a call from Walter Brown and he said they had a deal that would send me to the St. Louis Hawks,” said Macauley. “When we were in Boston, my son Patrick was diagnosed with spinal meningitis and we came back to St. Louis where he was under care. Walter said he didn’t want to make the deal because he couldn’t imagine the Celtics without me. Walter and I were close. I told him he would be doing me a favor and to make the deal (because my son’s care was there). That’s how the deal went down.”

Macauley likes to joke that of the most important points of his career, came during the Hawks’ NBA championship game in 1958 against the Boston Celtics. “I may have scored only two points in that game, but we won that game by a point,” he said with a chuckle. “So you see, without my two points we may never have won the championship.”

His number was retired by the Celtics in 1963. He has a star on the St. Louis Walk of Fame.

Macauley coached the Hawks for the 1958-59 and 1959-60 seasons. He finished with an 89-48 record. In the 1960 playoffs the Hawks defeated the mighty Minneapolis Lakers, led by George Mikan, in seven games. They then lost in the NBA Finals to the Celtics four games to three.

After retiring from sports in 1960, he became a television sports announcer in St. Louis. One of his favorite observations is, “When you are not practicing, remember, someone somewhere is practicing, and when you meet him, he will win.”

In 1989, Macauley was ordained a deacon of the Catholic Church. He is co-author of the book “Homilies Alive: Creating Homilies That Hit Home.” Macauley was inducted into the Naismith Memorial Basketball Hall of Fame in 1960 as a player. At age 32, Macauley was the youngest inductee ever. Macauley  was named one of the game’s 100 greatest players in 1990.