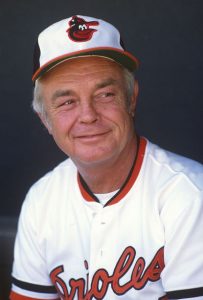 When introducing the Orioles’ new manager in 1968, GM Harry Dalton said, “In short, I believe Earl Weaver is a winner.” For the following 14 1/2 seasons the Orioles won more games than any other team, piling up six division titles, four pennants and one World Series championship. Weaver, a career minor-league player, became the revered Earl of Baltimore. He was legendary for fighting with umpires, his own players, and the English language. He became famous for his analysis of statistics. Weaver tracked head-to 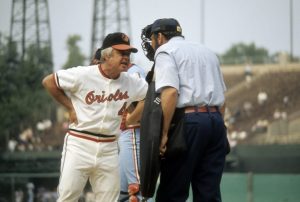 -head match-ups between pitchers and hitters, a practice other managers either claimed to keep in their heads or ignored altogether. Weaver’s confrontations with umpires were the stuff of legend and low comedy. Weaver never stopped agitating the men in blue from his seat in the dugout, his voice raspy from constant screaming and heavy smoking. Weaver’s 94 ejections rank fourth all-time among managers. When asked about that dubious achievement, Weaver defended his actions, saying, “You’ve got to tell a guy when he’s wrong.”