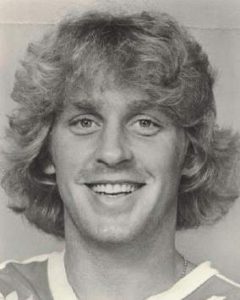 Don Droege might have pursued a baseball career. Instead, he chose soccer and reached levels of greatness that justified his decision to abandon baseball for “the beautiful game.” In soccer, Droege played professionally for nine seasons and competed for the U.S. National and Olympic teams from 1977-79. He ended his pro outdoor career having played more games as a defender than any other American-born player in the North American Soccer League, which lasted from 1968-84.

But it was in the mid-1970s when Droege reached a crossroads in his athletic career. He played baseball and soccer at CBC High School and St. Louis University. “People told me I had a chance to play pro baseball, but I had a good career going in soccer,” said Droege, a prep soccer All-American and a member of the 1973 NCAA championship soccer team at St. Louis U. “I was in my second season of baseball at St. Louis U. when I decided to stick with soccer.”

Family history had something to do with it. Droege’s dad, Bill, was a catcher in the minors and caught future Hall of Famer Bob Feller before World War II intervened and ended his big-league baseball dreams. Bill and his wife, Tirzah, raised 11 children: seven boys and four girls, all talented athletes in their own right. One of Droege’s brothers, also named Bill, was an outfielder who was drafted by the Cubs in 1972. He made it to 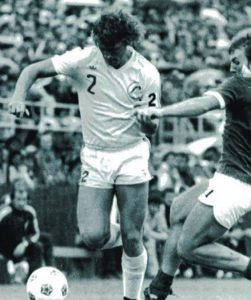 the Class AAA level — one rung below the major leagues — but no farther.

Don pinned his hopes on soccer and made it to the top. After his final season at St. Louis U. in 1976, Droege was an NASL first-round draft choice and began his pro career with the Rochester Lancers. He played with six different NASL teams, and finished his pro career indoors with the St. Louis Steamers from 1983-1985.

While pro soccer never paid off in terms of big contracts, the sport gave Droege many big moments and vivid memories. He made eight international appearances for the United States, including playing the entire match against powerful France on May 2, 1979. The French thoroughly thrashed the Americans, 6-0. Although it was “not one of my better performances,” Droege said, he wound up being featured playing against France in a poster distributed widely in France by Adidas.

In the NASL and with the United States, Droege covered some of the sport’s all-time great players such as Pele, George Best, Johann Cruyff, Franz Beckenbauer, Giorgio Chinaglia, Carlos Alberto and Gerd Muller. He treasures many photos showing him with those greats of the game. “I was lucky to be standing next to them,” Droege said. But Droege’s soccer career was based on much more than luck, as shown by his subsequent induction into the St. Louis Soccer Hall of Fame, the St. Louis University Hall of Fame, the CBC Hall of Fame and, now, the St. Louis Sports Hall of Fame.