Don Coryell spent 14 seasons as an NFL head coach, five with the St. Louis Cardinals and nine with the San Diego Chargers. His famed offense led the league in passing yardage every season from 1978 through 1983.

Coryell’s first pro head coaching job was with the Big Red. In those five seasons, the Big Red became one of the most electrifying and successful franchises in the Cardinals’ St. Louis history. During those years, his team’s aerial-attack offense became known as “Air Coryell.”

Those were the only division titles the Cardinals ever won while in St. Louis. Prior to 1974, the Cardinals had not been in the playoffs in 26 years since 1948 when they were the Chicago Cardinals. In 1975, the “Cardiac Cardinals” won seven times in the game’s final minute.

“He’s one of just a handful of people who had an impact on this game forever. He changed it,” said Mike Martz, the former St. Louis Rams head coach whose football philosophy is based in part on Coryell’s teachings. “I’m not sure why that hasn’t been acknowledged by the Hall of Fame.”

His groundbreaking passing attack helped revolutionize pro football as it’s now known – not only in St. Louis, but also in San Diego where he coached the Chargers for nine seasons, leading them to the post-season four times. Super Bowl-winning coaches John Madden and Joe Gibbs were assistants under Coryell, as were notable coordinators such as Ernie Saunders, Jim Hanifan and Rod Dowhower. Those NFL notables formed the branches of a coaching tree that later helped shape coaches such as Norv Turner (who learned under Zampese) and Martz (who studied under Zampese and Turner).

“It was the way he treated players,” Madden said when Coryell died in 2010 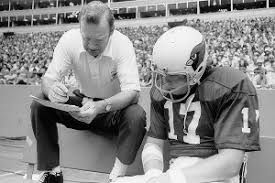 at the age of 85 after a lengthy illness. “I think that was something that was missed. We tend to jump right to the coaching part, the offensive part, and the passing game. But his No. 1 thing was his handling of the team. He was a master of it.

“As an assistant, he treated you as an equal. Players were always the most important thing to him. I think he had more respect for his players and coaches than anyone I’ve ever known.”

Coryell’s influence wasn’t felt just at the pro level. He was a successful coach at Whittier College and San Diego State, amassing a record of 127-24-3. He was the only head coach to win more than 100 games in college and the pros.

It was at San Diego State that Coryell began to emphasize a passing offense. Coryell recounted, “We could only recruit a limited number of runners and linemen against schools like USC and UCLA. And there were a lot of kids in Southern California passing and catching the ball. There seemed to be a deeper supply of quarterbacks and receivers. And the passing game was also open to some new ideas.” Coryell adds, “So we threw the hell out of the ball and won some games. When we started doing that, we were like 55–5–1.”

He came up with the idea of a one-back offense, and essentially invented the H-back position. His “passing tree” of receiving routes is now commonplace at all levels of football. And perhaps most notably, instead of using the tight end as an extra offensive lineman, he split him wide, away from the formation. He used sleeker, faster tight ends — most famously Hall of Fame tight end Kellen Winslow — thereby creating an exceptionally dangerous receiving target.

Coryell was the first coach ever to win more than 100 games at both the collegiate and professional level. He was inducted into the San Diego Chargers  Hall of Fame in 1986. Coryell is a member of the College Football Hall of Fame.