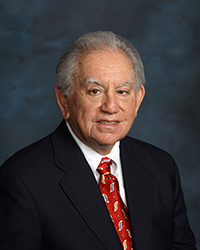 Golf has been a part of my life for over seven decades. It all began in the early 1950’s at the age of 8 caddying for my father, Dr. Charles Henry “Doc” Walters, at Crystal Lake Country Club, Creve Coeur Country Club and St. Charles Golf Course. This is when I got the itch for the game.

In 1962 my parents Doc and Doris Walters bought the ground which is now Bogey Hills Country Club. I was at Chaminade High School and helped renovate the clubhouse and helped build the first 9 holes.

I then attended Spring Hill College in Mobile, Alabama, where I lettered for four years in golf. After graduation, I served in the Air Force from 1968 until 1973. There I refueled the SR71 spy Plane called the “Black Bird.” I was stationed in McCoy Air Force Base in Orlando, Florida, and in Kadena Air Force Base on Okinawa. It was an honor to serve my country.

When I returned home I learned Bogey Hills had been upgraded to an 18-hole course. I became the golf professional in 1977 and earned my PGA membership. Two of the best hires I ever made were Bob Jones and John Prange to be golf professionals. As of today, they are two of my best friends.

In the early ’80’s I was elected president of the Gateway PGA section, which was a highlight of my career. I was fortunate to be elected to the PGA of America National Board of Directors. While on this board, I served on two Ryder Cup committee’s and was part of securing the naming rights of the PGA West development. This was also a turning point in the PGA organization by becoming a business organization rather than a fraternal organization.

In the ’80’s I decided my game was not PGA tour quality and I did not want to be a teaching professional so I thought, if my Dad could do it, I could do it. I teamed with some real estate developers and started Whitmoor Country Club; which turned out to be a very successful 36-hole real estate development in St. Charles County.

In the ’90’s, I had learned St. Louis was ranked in the top 10 for being under developed for golf courses. That is when I teamed up with the University of Missouri to develop a Tom Fazio designed, high-end public course, The Missouri Bluffs.

I have always had a passion for growing golf — from tournaments, to junior golf to developing player-friendly golf courses. My desire to continue with golf course management lead me to begin Walters Golf Management. I hired Jeff Smith from the Gateway PGA, Lucy Mitchell, for her food and beverage skills and Denis Barron for his agrimony skills. This new team led to the development and building of: The Links of Dardenne, The Golf Club of Wentzville, and Gateway National Golf Links. In the 2000’s, we had grown to an additional 11 properties. Hosting many junior, women, men and mixed event tournaments and clinics.

In 2009 I sold the management company to Jeff Smith and Lucy Mitchell and semi-retired. Now my focus has been teaching my children, Angel Likens and Denny Jr,. about operating a family-owned club. Educating them on what I have learned over the years on golf course management, clubhouse and golf shop operations, membership relationships as well as financial relationships.

I still have a soft spot for junior golfers who want to learn the game. I always have the door open to accept tournaments for the PGA Section, The Metropolitan Golf Association, St. Louis Men’s and Women’s District as well as the State Golf Association as well as many others.

I have had the time of my life growing this game and I hope to continue, if the good lord allows me.