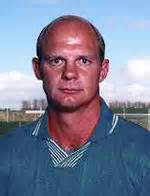 Back in January 1983, midfielder Daryl Doran wondered if he would survive his rookie season with indoor soccer’s St. Louis Steamers. He had left St. Louis University early to turn pro. But the Steamers were struggling, and a new head coach said he didn’t have time “to have players like Doran come around and mature.”

Doran need not have worried. Doran’s professional indoor soccer career spanned 23 years from 1982 to 2005 (with one appearance in 2008, and another in an exhibition match in 2014). He has played in 827 professional indoor soccer games, more than anyone else in U.S. history, and has appeared in 13 All-Star Games. He is beginning his third season as head coach of the St. Louis Ambush of the Major Arena Soccer League.

It would be misleading to remember Doran only as someone who survived for a long time. While his peers attribute his professional lifespan to his extraordinary strength and fitness, they point out that, mainly, he was a damn good player. “What Daryl brought to the table is that he could step on the floor and change the game,” said Jamie Swanner, who played six years as a goalkeeper behind Doran with a previous incarnation of the Ambush.

Doran played on six different teams in five different indoor soccer leagues. In addition, he coached the old Ambush from 1992 to 1999 and a reincarnation of the Steamers from 2000 to 2005. He led the Ambush to a league championship in 1995. The prime of Doran’s career spanned an era when there was no major professional outdoor league in the United States.

Just how good an outdoor pro player might he have been? The answer is easy: He probably would not have played at all. “I’ve had arthritis in my big toes since I was a teenager, and they don’t bend,” Doran said. “Outdoors, the grass would make them bend, and by the end of practice I couldn’t kick a ball. That’s one of the reasons why I didn’t push outdoor. I would have liked to have tried, but I probably would have ended in one year.”

Doran showed great promise outdoors. He started all four years at CBC High School. He was drafted twice by the New York Cosmos and once by the Tampa Bay Rowdies of the outdoor North American Soccer League while still at CBC.

A religious weightlifter, Doran became legendary for his fitness and his strength. But even a phenomenon has its limits, and for Doran, the end came at age 42 when he learned the anterior cruciate ligament in his left knee had disintegrated.

Today, besides coaching the Ambush, Doran owns a fitness center near Lake St. Louis. His center offers specialized training for young athletes. The instructor is . . . who else? . . . but that strength and fitness fanatic, Daryl Doran.

This story is adapted from “Soccer Made in St. Louis: A History of the Game in America’s First Soccer Capital,” by Dave Lange and published by Reedy Press.