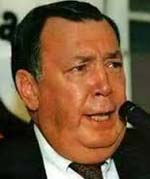 For a generation of St. Louis hockey fans who were learning about the National Hockey League in the Blues’ infancy, Dan Kelly was their tour guide. He became the team’s radio voice in its second season and educated listeners and hooked them with his electric, signature goal call. “He shoots … he SCORRRES!” But it was Kelly who also scored, as he developed into one of the most iconic sportscasters in a city that has produced an inordinate number of nationally known figures. And like many of those on a list that includes Harry Caray, Jack Buck, Jay Randolph, Dan Dierdorf, Bob Costas and Joe Buck, Kelly reached the big time.

His epic run lasted 21 seasons, and it now has been a quarter century since his voice was silenced. It was 25 years ago that he died, at age 52, from cancer.

Buck was the team’s radio voice and Randolph called the TV games in the Blues’ inaugural season in 1967-68, and although well-known locally they were far from polished hockey announcers. “I was learning as we went along, and I think Jack was, too,’’ Randolph recalled. Still, they helped acclimate the town to the NHL. But Blues owner Sid Salomon Jr. and Robert Hyland, who ran the team’s radio home — KMOX — went for hockey experience the next season. Randolph said before season two, Salomon invited him to hear a tape of a hockey announcer. “I listened for about five minutes,’’ Randolph said. “Then he flipped it off and said, ‘What do you think of that guy?’ I said, ‘He sounds pretty good to me, who is he?’ He said, ‘His name is Dan Kelly and he’s been working in Ottawa … I think we’re going to hire him.’’

Kelly, then a 31-year-old Irish Canadian who had been the third wheel on the legendary “Hockey Night in Canada’’ broadcast team, soon became a popular figure in St. Louis and the huge reach of KMOX helped him gain national exposure. Kelly’s ascent was fast, leading to him becoming the voice of the Stanley Cup finals on television, working some on American networks and others on Canadian outlets, for many years. Kelly no longer was the third wheel; he had become the voice of hockey.

“He dominates his sport like no other announcer,’’ Sports Illustrated media critic Bill Taafe wrote in 1985. “There’s the stout Irishman, and then there’s the rest.” “He put St. Louis on the map in Canada,’’ former Blues coach, standout forward and fellow inductee Brian Sutter once said. “And when you made the Blues, it wasn’t like you just made the Blues or the NHL; it was you made Dan Kelly. The man was just a legend in Canada. There were two guys you heard growing up, Danny Gallivan and Foster Hewitt. And Dan Kelly got as big as those guys.’’

He was fun-loving off the air but on the job, he was all business. Stories about his professionalism as well as his sense of humor, and appetite, still resonate — a quarter of a century later — with some of those with whom he shared times.

Gary Mueller and George Csolak were Blues newspaper beat writers during part of Kelly’s run. The traveling media contingent was small and those people got to know each other extremely well. Csolak, who was on the Blues beat for the old Globe-Democrat from 1981-86, said: “I learned the game of hockey by listening to Dan’s broadcasts when I was a kid, so getting the chance to work with him on a regular basis as a fellow media member was a thrill for me.’’

Kelly, who wasn’t afraid to criticize Blues players, had many broadcast partners, including Noel Picard, E.J. Holub, Ron Jacober, Nancy Drew and most notably Gus Kyle. Off the air, Kelly loved to have a good time — and enjoy an ample post-game meal.

“My first year on the beat in 1981, I came into training camp in the best shape of my life,’’ Csolak said. “Then I was taken under the wing of Dan and got to experience some of the finest restaurants in North America. Dan loved to eat and man, could he eat.”

Kelly and his wife, Fran, had six children and the two sons have followed their dad’s career path. John is in his 12th season as the TV voice of the Blues in his second round with the team, and Dan has had a variety of NHL broadcasting jobs, including a stint as the radio voice of the Blues. He now does play-by-play for the Big Ten and Chicago Fire soccer team.