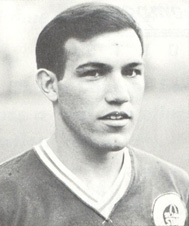 Pick a sport, and Carl Gentile could play it well — so well, that he reached the professional level in three different sports. He played minor-league baseball for the New York Mets. He made the taxi squad (the reserve team) for the then-Houston Oilers as a placekicker.

But it was in soccer that Gentile left his biggest mark. Gentile played for the U.S. Olympic soccer team in 1964 and the U.S. National Team in 1968. He then logged three seasons in the North American Soccer League. He showcased his athletic ability in soccer as a high-scoring forward at St. Louis University — where he is the school’s second all-time leading scorer although he played only three seasons on the varsity — and as both a defender and a forward at the professional and international levels. He helped the Billikens to two NCAA soccer 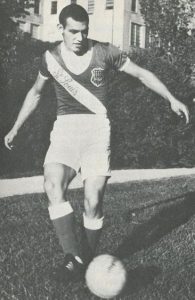 titles and an unbeaten, untied season during the 1965 season.

A four-sport athlete at CBC High School, Gentile was an All-American in soccer and baseball at St. Louis U. and helped the Billikens to the 1965 College World Series, where they finished third. The Mets signed Gentile as an outfielder. Shortly after that, Gentile went to an open tryout for the Dallas Cowboys. He impressed them as a placekicker and was invited back for another tryout. He decided to stay with baseball.

Gentile played for the Mets’ Rookie League affiliate in Marion, Ga., in 1966. Gentile turned to soccer when the National Professional Soccer League, the forerunner of the NASL, began in 1967. Gentile joined the St. Louis Stars that year.

With the NASL struggling to stay in business in 1969, and with NFL teams signing former soccer players as placekickers, Gentile tried out for the Houston Oilers. The Oilers already had drafted Roy Gerela in 1969, and he became the Oilers’ regular placekicker. But Gentile showed enough during training camp that the Oilers decided to keep him on their taxi squad in 1969-70.