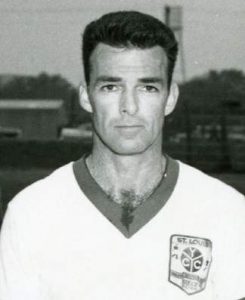 A graduate from St. Louis University High School in 1947, Bobby Kehoe played on the school’s first soccer team in 1943. After high school, he spent time in the Philadelphia Phillies farm system, but soon returned to soccer.

In 1969, Kehoe moved from player to coach, becoming the first U.S.-born coach in the NASL in the 1969 and 1970 season when he coached the St. Louis Stars. During his two seasons as head coach, he used rosters of predominantly U.S.-born players, unlike most other coaches in the NASL. In 1972, the U.S. Soccer Federation hired Kehoe as coach of the U.S. national team.

He became coach of the Granite City North High team from 1973-83, then became the head coach of the Bud Light women’s over-30 team. The Bud team went to the women’s over-30 national championship game every year from 1983 to 1988. During those years, Kehoe also served as the director of coaching for the Busch Soccer Club.