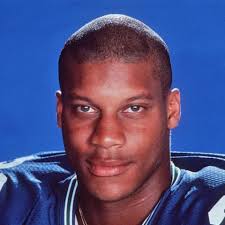 I  was a two-time All-State performer as a wing back in football at Lutheran North. I was a part of the first state football championship team my senior year in 1981. I had skills as a defensive back as well, having recorded a 99 yard interception return for a touchdown during high school. I then accepted a football scholarship to the University of Arkansas.

I also made the All-District team in basketball my junior year. I had a career-high 26 points one game and that was without the 3 point line. I shot a lot of long jumpers in my basketball career, so I would like to think that I would have had over 30 points in that game.

I also started three years in center field on our baseball team at Lutheran North, hitting two grand slams my sophomore season. Being drafted in the 12th round by the Cardinals was one the highlights in my baseball career at Lutheran North.

At the Arkansas, I had a successful career as an offensive threat playing football. I started at tailback as a 175-pound sophomore against Tulsa and I recorded over 120 yards of total offense my first game as a starter in college. This was significant, especially since I got recruited as a receiver by Coach Lou Holtz. I was an all purpose player. Receiver, running back, kick returner – I was blessed to do it. I hold a Liberty Bowl record with 10 receptions, and was voted offensive MVP in the Holiday Bowl – a testament of being an all purpose player. 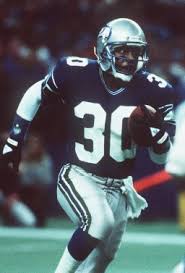 I also rank third in Razorbacks history for most punt return yardage in a career. I also played baseball for two seasons at  Arkansas.

I was chosen in the fifth round of the 1986 NFL draft by the Seattle Seahawks. As a rookie, I was voted an All-Pro as a kick returner, and I  was voted to play in the Pro Bowl.

I played a big role in my third year with a big kickoff return and a critical punt return, to contribute to the Seahawks’ first division title. My returns during that game at Oakland in ’87, set up scores, helping us to a 41-37 victory..

I played professional baseball in the Philadelphia Phillies organization following my third NFL season. I had a great spring training, and I was named the starting centerfielder for the Reading Phillies in Double A on opening day. That was very rewarding, considering I had not played baseball in four years.

I suffered a leg injury the next football season playing for the Raiders, which curtailed my career. I returned to the NFL six years later with Tampa Bay –  the longest comeback in modern day football history.

I had a successful season upon my return to the NFL. I ended up setting a single season record with the Buccaneers, for the most kickoff return yardage gained in a season, which still stands today. I ended up fifth in the NFC in punt return average that season as well. Not bad for having not played in the NFL for six years.