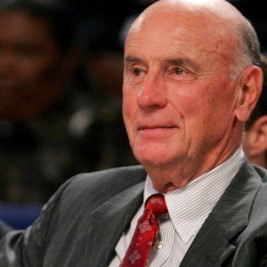 When Bob Pettit came out of college in 1954, no one thought he was talented enough to make it as a professional basketball player. Although he had been a prolific scorer at Louisiana State University, the 6-foot-9 forward was deemed too slight to survive the pounding of an National Basketball Association season.

However, after 11 years with the Milwaukee and St. Louis Hawks, he retired having become the first player in the league to top 20,000 points. The greatest forward of his era, Pettit was an All-Star in each of his 11 seasons, an All-NBA First Team selection 10 times, and an All-NBA Second Team pick once. He left the sport with two Most Valuable Player awards and an NBA championship ring. Bill Russell of the Boston Celtics said of Pettit: “Bob made ‘second effort’ a part of the sport’s vocabulary. He kept coming at you more than any man in the game. He was always battling for position, fighting you off the boards.”
Robert E. Lee Pettit Jr.’s  basketball career got off to a discouraging start. He was cut from the Baton Rouge (Louisiana) High School team as a freshman and sophomore. When he tried out for the high school team as a junior, he was 6-4, and he finally made the squad. One year later, in 1950, he led Baton Rouge High School to the state championship and earned a scholarship to LSU, where he earned All-America honors twice, averaging 27.4 points during his college career. By the time he reached his senior year at LSU, he had added five inches in height. 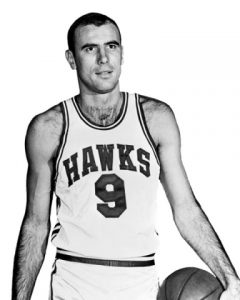 Pettit was chosen in the first round of the 1954 NBA Draft by the Milwaukee Hawks and won the Rookie of the Year Award by averaging 20.4 points and 13.8 rebounds a game. Pettit also played in his first All-Star Game that year and earned his first of 10 straight selections to the All-NBA First Team.

Despite Pettit’s Rookie of the Year performance, Milwaukee finished last and the next season owner Ben Kerner moved the team to St. Louis. Pettit was named MVP for the 1955-56 season after leading the league in scoring (25.7 ppg) and rebounding (16.2 rpg). He also earned the MVP honor at the 1956 NBA All-Star Game, in which he had 20 points, 24 rebounds and seven assists.

St. Louis acquired Ed Macauley and rookie Cliff Hagan from Boston for the 1956-57 season for the draft rights to Bill Russell. Then, guard Slater Martin came to the club and Alex Hannum arrived a few weeks later and took over as player-coach with 31 games left on the schedule. The team immediately began to hit its stride. After winning the Western Divisioin title by besting Ft. Wayne and Minneapolis, the Hawks faced the Celtics in the 1957 NBA Finals. Boston won Game 7 in two overtimes, a game called one of the most exciting in NBA Finals history. Although the Hawks lost, Pettit excelled – averaging 29.8 points and 16.8 rebounds a game.

St. Louis came back the next season to claim the division title. Pettit scored 24.6 ppg and pulled down 17.4 rpg, and he earned All-Star Game MVP honors with a performance that included 28 points and 26 rebounds. In the 1958 playoffs, the Hawks and the Celtics squared off in the NBA Finals for the second straight year. This time, the Hawks prevailed with Pettit scoring an NBA playoff record 50 points in the sixth and deciding game to lift the Hawks to the championship.