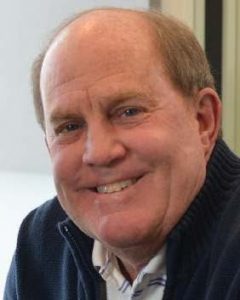 When the sports media need expert analysis of soccer, they contact Bill McDermott. And with good reason. McDermott is the longest-running current soccer broadcaster in the United States. He has been calling games at all levels of the sport for the past 45 years. You name it — NCAA tournaments, Major League Soccer matches, the World Cup — and McDermott has been behind the microphone for all of them.

It is no wonder that journalists call McDermott “Mr. Soccer.” “Soccer has been a part of my life for many years and has provided me with great opportunities, both as a player and an announcer,” said McDermott. “I’ve been very fortunate to work with all the people I’ve encountered along the way, and I’ve taken a lot from each of them. It’s shaped the commentator I am today. I feel very
fortunate and honored to still love what I do.”

After playing soccer for most of his life, McDermott began covering the sport as a reporter in 1970 when he attended the FIFA World Cup in Mexico and provided reports for KMOX radio in St. Louis. In 1972, he began his career announcing games in the North American Soccer League, providing color analysis for St. Louis Stars away games on KPLR-TV in St. Louis.

In addition to providing commentary for the first soccer game televised on ESPN in 1979, McDermott’s career highlights include reporting on every World Cup since 1970 for national and local media outlets such as ESPN, XM radio, KMOX and KFNS radio, and KSDK and KTVI TV. McDermott comes by his soccer know-how from a career that began as a high-level player when St. Louis was the soccer capital of the United States. His prowess as a youth player caught the eye of then-St. Louis University head soccer coach Bob Guelker, one of the nation’s top college coaches with seven NCAA titles to his credit, the year before Guelker moved to SIU-Edwardsville. Guelker recruited McDermott to St. Louis U., where McDermott played for another legendary coach, Harry Keough. McDermott played on two NCAA champions, including an undefeated Billiken team in 1969.

“They don’t call Bill ‘Mr. Soccer’ for nothing,”says NBC sportscaster Bob Costas. “He is steeped in the history of the game, while also staying current. He knows it strategically, technically, and historically. As a one-time excellent player himself, his commentary carries additional credibility. Plus he’s a universally well-liked guy — easy to work with, easy to be around — unless you object to his propensity for recycling the same dozen or so jokes and routines for all the years I’ve known him.”

McDermott was inducted into the Missouri Sports Hall of Fame in January 2009 as a member of the 1967 and 1969 St. Louis
University NCAA Champions and in recognition of SLU’s 50 years of soccer. He is also in the McBride High School, St. Louis University and St. Louis Soccer Halls of Fame.