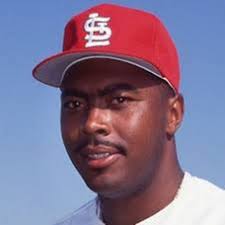 It’s a little-known fact, but there is actually a link between Bernard Gilkey and former Cardinals’ great Red Schoendienst besides both having played with the St. Louis Cardinals. It was in 1991 that Gilkey became the first rookie to start for the Cardinals on opening day in left field since Schoendienst did it in 1945. Of course, Schoendienst was better known as a second baseman, but started his rookie season in the outfield.

Gilkey was a premier athlete in high school, lettering in basketball as well as baseball. He signed a letter of intent to play college basketball at Drake University. However, fearing that he really wasn’t tall enough at 6-foot even, he chose instead to sign with the Cardinals as an undrafted free agent.

In 1989, Gilkey led the Double-A Arkansas Travelers with 53 stolen bases and 109 runs. In 1990, he led the
league with 75 walks while playing with the Triple-A Louisville Redbirds and was a late season call-up for the Cardinals.

Gilkey played six seasons with the Redbirds, but was traded during the off-season in January 1996 to the New  York Mets. Gilkey arguably had his strongest season in ’96. His .317 average was eighth in the National League, while his 44 doubles ranked fourth (and also set a Mets single season record). Gilkey finished 14th in National
League MVP voting that year. Gilkey led the league with 18 outfield assists 1996 — one of six double-digit assist years in his career, with his career high being 19 outfield assists in 1993, which tied for the league lead.

In 1998, Gilkey was traded to the Arizona Diamondbacks. He was released by the Diamondbacks in the middle of the 2000 season and signed with the Boston Red Sox as a free agent. Gilkey made the playoffs as a Diamondback in 1999 and in 2001 with the Atlanta Braves. Gilkey’s career ended after the 2001 season.

Gilkey had a small role in the 1997 film Men in Black. The climax of the film took place in Flushing Meadows-Corona Park in New York City near Shea Stadium, home of the Mets. Gilkey appearing in his real-life role as a Mets outfielder, was distracted by a massive spacecraft above Shea Stadium (actually one of the two circular observation towers from the 1964 World’s Fair) and was hit on the head by a fly ball.