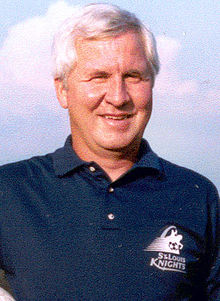 On Aug. 22, 1973, a tall, lanky midfielder from St. Louis named Al Trost made his first appearance for the U.S. Men’s National Soccer Team. The opponent: Poland, the 1972 Olympic gold medalist that would finish third in the 1974 World Cup. The match, played in New Britain, Conn., was a “friendly,” or an exhibition contest. But given the stature of Poland in world soccer at that time, this was anything but a practice game for the unheralded Americans. In the 37th minute, fellow St. Louisan Gene Geimer “laid off a nice ball to me and I half-volleyed it from 20 yards out into the upper corner,” Trost said. The U.S. held on to win 1-0, one of the Americans’ biggest victories ever up to that time. “I guess that’s the shot that goes down in history,” Trost said.

“I’m amazed that it has gotten so much recognition because it was a friendly game, but they had their regular players there and I’m sure they were playing to win. It happened in an area of town that was Polish. I think they came out to see Poland; they didn’t come out to see us. So I think we won over some fans in that game.”

Trost won over many fans during a career that is one of the finest in the annals of American soccer. Trost is one of only three two-time winners of the Hermann Trophy, awarded annually to the most outstanding player in college soccer. At St. Louis University, he helped the Billikens to two NCAA championships and an overall 37-1 record. But he made his biggest mark as a pro player in the United States and as a star for the U.S. in international competition. Playing in the foreign-dominated North American Soccer League during the 1970s, Trost was named to the all-NASL team three times.

Internationally, he helped the U.S. qualify for the 1972 Olympics and was so well-respected that he was named captain of the U.S. Men’s National Team, one of the highest honors a soccer player can receive from his country. That earned Trost the nickname of “Captain America.”

“Al was the first midfield player I saw who could dominate a game,” said a contemporary, goalkeeper Shep Messing, who played for the U.S. and for the New York Cosmos. “Al was this tall, gangly kid who was the opposite of smooth, yet he was so effective as what we call a box-to-box, two-way midfield player.”

Remembered John Carenza, a St. Louisan who teamed with Trost on the Olympic team and with the NASL’s St. Louis Stars: “There wasn’t anything Al couldn’t do. You knew when we were in our defensive third, Al would get the ball and make that transformation from defense to offense. In one game with the Olympic Team, Al got the ball just on the defensive side of midfield and started dribbling down the field. He just went down the middle beating people and ended up shooting and scoring. That was Al; he could do that. In the defensive third he was a great defender, tall, lanky, long legs, but had a sense for the ball. He could read the game well, he could distribute well and he could play defense, so he was the complete midfielder.”

Trost coached the St. Louis Steamers in the Major Indoor Soccer League and became a high school educator. He coached McCluer North’s boys to a Missouri state high school championship. He currently teaches at Parkway South High School and coaches the school’s varsity boys’ and girls’ soccer teams. His students show interesting reactions when they learn of the background of their tall, graying instructor. “I get in more trouble now from my students ’cause they Wikipedia me and they see this article where I was Captain America,” Trost said. “Every once in a while they’ll blurt out, ‘You know you’ve got a Wikipedia page and they used to call you Captain America? What’s that all about?’ I go, ‘Well, that’s a long story.’”

The long story of Al Trost added a major chapter in 2006. In that year, Trost was inducted into the U.S. Soccer Hall of Fame.

(Adapted from “Soccer Made in St. Louis: A History of the Game in America’s First Soccer Capital,” by Dave Lange and available from Reedy Press. See soccermadeinstlouis.com for more information.)